Holy Land, My Country
His Majesty King Hussein of Jordan describes his country; politically new, but archaeologically as old as the hills, and historically as old as man.
Jerusalem, My Home
The 86- year- old author has lived a fascinating life in Jerusalem, helping the unfortunate through the city’s American Colony Aid Association and earning the respect of the men who have shaped the city’s destiny.
The Other Side of Jordan
King Hussein shows a Geographic writer his fast- changing land, from holy Jerusalem to the high, wild country of the Bedouin.
Washington: The City Freedom Built
The Inauguration of the nation’s newly elected President next month swings the spotlight of world attention to the stately, dynamic, ever growing capital of 192 mililon Americans.
The Two Acapulcos
A dream world and a ruggedly real world meet in an intriguing city on Mexico’s Pacific shore.

Be the first to review “National Geographic December 1964” Cancel reply 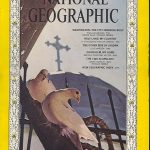