With an Exile in Arctic Siberia: The Narrative of a Russian Who Was Compelled to Turn Polar Explorer for Two Years
Exiled for five years by the government to a frigid, swampy region near the Arctic Ocean, a political dissident learns to live on raw frozen reindeer marrow – – and without the company of another literate soul.
Porto Rico, the Gate of Riches: Amazing Prosperity Has Been the Lot of Ponce de Leo?n’s Isle Under American Administration
After a bare quarter century under U. S. influence, the value of the island’s exports has increased 12 times, imports are up, the number of students has dramatically increased, and the death rate has been halved.
A Char- a?- Bancs in Cornwall
The magnificent southwest coast of England, equally popular as a summer and winter resort, is richer in prehistoric and early Christian antiquities than anywhere else in the country.

Be the first to review “National Geographic December 1924” Cancel reply 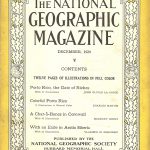