The Land Where the Murray Flows
From mountains to sea, Louise E. Levathes and David Robert Austen follow the problems and promise of the Murray River, lifeblood of Australia’s major agricultural region.
Our Restless Planet Earth { Illustrations text}
Slowly, inexorably, the face of our world is changing. New tools help scientists tell where we’ ve been and where we’ re going. Rick Gore and photographer James A. Sugar document the latest discoveries.
The Pearl
These aquatic gems have long measured wealth, majesty, and romance. Fred Ward traces the history of pearls into today’s mass culturing of many varieties.
Fossils: Annals of Life Written in Rock
From the birth of microscopic bacteria 3. 4 billion years ago to a 25- million- year- old saber- toothed cat fight, secrets of Earth’s history are chronicled in rock. By James L. Amos and David Jeffery.
Senegambia: A Now and Future Nation
Already united by cultural heritage of their people, two governments have joined forces in transportation, defense, and communications. Michael and Aubine Kirtley explore the confederation of Senegal and the Gambia.

Be the first to review “National Geographic August 1985” Cancel reply 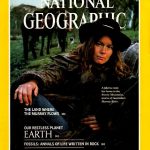