Bulgaria, Farm Land Without a Farmhouse: A Nation of Villagers Faces the Challenge of Modern Machinery and Urban Life
Though the capital, Sofia, flourishes as a modern city, the majority of Bulgarians in this agricultural land of conservatism continue to farm the land of their ancestors.
Ontario, Next Door: Alert, Energetic, and Resourceful, Its British Pluck and Skill in Arts and Trades Gain for This Province a High Place Under the Union Jack
Both the physical and cultural center of Canada, versatile and indomitable Ontario boasts a wide range of economic activity including nickel and gold mining, fruit farming, hunting, fishing, and manufacturing.
Edinburgh, Athens of the North: Romantic History of Cramped Medieval City Vies With Austere Beauty of Newer Wide Streets and Stately Squares
The Manhattan of the Middle Ages, Scotland’s story- filled capital brims with momentous events in British history, literature, and legend.
The Nest Life of the Osprey { Photographing the Nest Life of the Osprey}
Staking out a nest in a promising spot, the author collects a series of detailed photographs of the birds’ nesting and nurturing activities, along with dramatic slow motion images of an osprey landing.

Be the first to review “National Geographic August 1932” Cancel reply 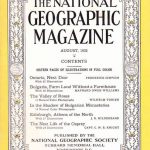