Across the Midi in a Canoe: Two Americans Paddle Along the Canals of Southern France from the Atlantic to the Mediterranean
Slicing through the southern France, our canoe travelers disembark to tour modern farms, 12th- century cloisters, and bustling markets.
Air Conquest: From the Early Days of Giant Kites and Birdlike Gliders, the National Geographic Society Has Aided and Encouraged the Growth of Aviation
Ths Society has long chronicled aviation, including the origins of aircraft types, the science of aviation, the use of aircraft in war, commerce, and industry, and the role of aircraft in exploration.
Navigating the Norge from Rome to the North Pole and Beyond: The Designer and Pilot of the First Dirigible to Fly Over the Top of the World Describes a Thrilling Voyage of More Than 8, 000 Miles
At 348 feet long, 62 feet wide, and 79 feet high, the Italian- designed dirigible drew criticism as being too small for the expedition, but modifications in weight and shape allowed it to weather storms and complete its historic flight.
Stalking the Dragon Lizard on the Island of Komodo
Forked tongues flickering, huge, carnivorous Komodo dragons emerge from forests in the Lesser Sundra Islands when lured with bait by scientists from the American Museum of Natural History.
In Smiling Alsace, Where France Has Resumed Sway
The individualist people of the fertile Alsace region of France maintain their own subculture, distinct yet harmonious with the rest of the country.

Be the first to review “National Geographic August 1927” Cancel reply 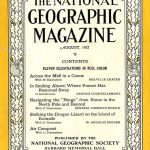