Struggling Poland: A Journey in Search of the Picturesque Through the Most Populous of the New States of Europe
The author examines Poland’s day- by- day life as this country recovers from the devastation of World War I.
The Life of the Moon- Jelly
The author examines the biology of this jellyfish species familiar to patrons of East Coast beaches.
Through the Great River Trenches of Asia: National Geographic Society Explorer Follows the Yangtze, Mekong, and Salwin Through Mighty Gorges, Some of Whose Canyon Walls Tower to a Height of More Than Two Miles
Joseph Rock realizes his goal to bring home to America in pictures the sheer rock faces and churning waters of China’s famous river gorges and the lifestyles of those who live along them.
Siena’s Palio, an Italian Inheritance from the Middle Ages
The Tuscan city of Siena turns back the clock for the Palio, an annual festival in medieval style, headlined by a parade in period costume and a thrilling horse race.

Be the first to review “National Geographic August 1926” Cancel reply 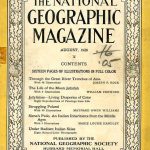