National Geographic Society Honors Air Pioneer Juan Trippe
The chairman of Pan American World Airways and trustee of the Society for 25 years receives the Society’s Hubbard Medal for contributions to geography through the development of air routes.
The Netherlands: Nation at War With the Sea
Constantly building dikes and dunes, the Dutch have salvaged much of their nation from the sea. Now they construct a modern flood control system called the Delta Project.
Viet Nam’s Montagnards: Caught in the Jaws of a War
On his 18th journey to Vietnam in 18 years, an American photojournalist lives in the highlands with a war- ravaged group that fights on both sides in the Vietnam War just to survive.
Dory on the Banks: A Day in the Life of a Portuguese Fisherman
Men of a Portuguese fleet row craft through the Grand Banks and the Davis Strait and sleep in accompanying schooners to catch cod in the manner of their forefathers.
Nature’s Year in Pleasant Valley
The Geographic’s natural scientist records the changing seasons on his farm in western Maryland.
Robert V. Fleming, 1890- 1967
The Editor- in- Chief of the Geographic remembers the accomplishments of a banker who served the Society as treasurer and trustee.

Be the first to review “National Geographic April 1968” Cancel reply 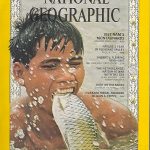