The Galapagos, Eerie Cradle of New Species
A noted ornithologist takes a close look at the animals and environment of the Pacific archipelago off Ecuador that inspired Charles Darwin to conceive the theory of evolution.
The Rhine: Europe’s River of Legend
From high in the Swiss Alps to Rotterdam on the North Sea, the 820- mile waterway passes landmarks of history as it carries freight through six Western European nations.
The Tower of the Winds { Piecing Together and Ancient Puzzle: The Tower of the Winds}
Near the Acropolis in Athens, a mysterious 2, 000- year- old marble tower once held a showpiece water clock, according to a Yale University professor.
New Grandeur for Flowering Washington
Imaginative plans are in store for the rejuvenation of Pennsylvania Avenue and the Mall, the urban renewal of Southwest Washington, and the conversion of old buildings into art galleries in the nation’s capital.

Be the first to review “National Geographic April 1967” Cancel reply 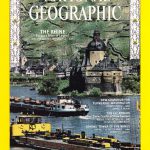