Viscount Bryce’s Last Article on the United States- -The Scenery of North America { The Scenery of North America}
A former British ambassador to the United States describes the grand scale of the continent’s western landscape and the charm of the eastern hills and coastlines.
South Georgia, an Outpost of the Antarctic
Lying some 1, 000 miles east of Cape Horn, the island hosts scant terrestrial life but is teeming with creatures of the sea and two dozen species of birds.
Modern Scenes in Mesopotamia, the Cradle of Civilization { Modern Life in the Cradle of Civilization}
Sixteen color photos of Mesopotamia taken by Eric Keast Burke, show daily life in the Near East.

Be the first to review “National Geographic April 1922” Cancel reply 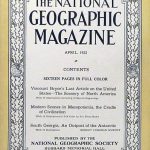