The Oldest Free Assemblies
Noting that all of the free assemblies. .. of the earth have been modeled either upon your practice or upon ours or upon both combined, a Scottish statesman addresses the U. S. House of Representatives and expresses Britain’s gratitude for America’s de
Their Monument Is in Our Hearts
In an address before the Tomb of Washington at Mount Vernon, the President of the French Commission to the United States salutes the young army that will share our common glory.
Friends of Our Forests
Color pictures of 36 different species of North American warblers, painted by Louis Agassiz Fuertes, are accompanied by general family characteristics and individual descriptive articles.
The Call to the Colors
Seventeen full- page photographs illustrate America’s rapid mobilization for war.
Do Your Bit for America: A Proclamation by President Wilson to the American People
Finding not a single selfish element. .. in the cause we are fighting for, the American President calls upon all – – manufacturers, farmers, miners, editors, clergymen, housewives – – to support our men in arms.
The Russian Situation and Its Significance to America
Noting that German influence in Russia has become a menace to the independence of the Russian people, the author explores the roots and consequences of that influence.
A Tribute to America
A former Prime Minister of Great Britain thanks our kinsmen in America for their decision to join in the war effort – – a decision motivated not by calculation of material gain, not hope of territorial aggrandizement, but only by the constraining force;
Our Heritage of Liberty: An Address Before the United States Senate by M. Viviani, President of the French Commission to the United States, May 1, 1917
Noting that he is the first foreigner to ever speak in the U. S. Senate chamber, Viviani thanks America for joining democratic Europe in the struggle against the avalanche let loose by Prussian militarism.
The Outspeaking of a Great Democracy: The Proceedings of the Chamber of Deputies of France on Friday, April 6, 1917, as Reported in the Journal Officiel de La Re?publique Franc?aise
Replete with indications of applause and cries of assent, the record of France’s enthusiastic reaction to America’s entry into the war is printed.
The Burden France Has Borne
When the earth’s last judgment is given on this great war, says the author, France will be deemed to have saved the world from despotism.

Be the first to review “National Geographic April 1917” Cancel reply 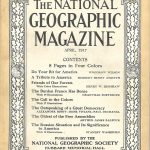