At a riverbank in Africa’s Serengeti, thousands of migrating wildebeest try desperately to cross as terrifying crocs feast on the galloping herds–which must attempt the river for a chance at survival. In the Falkland Islands, the albatross–king of migrations–journeys thousands of miles to nest despite the deadly cara cara, a predatory raptor. For countless animals species, migration is a dramatic, dangerous, and crucial undertaking…one that is portrayed in vivid color and unflinching candor in this magnificent book, companion to the 7-hour HD epic television event from National Geographic which airs beginning on Sunday, November 7th, 2010. The book follows the sequence of the film, with each section highlighting a factor that makes these epic journeys essential. “The Need for Speed” documents migration as a race against time, in which freezing temperatures or scorching heat usher in a crisis. Incredible photographs document activity along the Mississippi Flyway, which teems with long-distance travelers: red-winged blackbirds, white pelicans, tundra swans, and the birds of prey that patrol the skies. In “The Need to Feed,” the annual search for greener pastures means life must go on the march as hungry predators lie in wait. Dramatic stills show as many as 40,000 walrus trying to evade 200 polar bears…and a jungle terrorized by nature’s perfect killer: millions of voracious ants that work as one to overwhelm other species. “The Need to Lead” explains that migrations need generals, admirals and pioneers. How well the leaders keep their charges in line and on track will determine a species’ fate. And in “The Need to Breed,” the drive to renew the species forces every generation to risk it all. We experience the Falkland Islands, where aggressive, multi-ton elephant seals battle for the right to breed, and the lush rain forest canopy, where primates gather to feed and mate while smaller creatures glide from tree to tree.In every instance, both the migrating herds and the predators they sustain are faced with a new threat: global climate shift. Safe havens are vanishing, and migrating animals must stay one step ahead of a changing planet. Their struggle to survive despite mounting odds, set against the incomparable beauty of the natural world, fills this magnificently photographed book with drama, fascination, and beauty.

Be the first to review “Great Migrations” Cancel reply 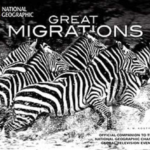