When David Breashears agreed to climb Mount Everest with an IMAX camera in order to film from the summit, he had no idea that his little expedition would become embroiled in a tragedy that would make headlines around the world. On May 10, 1996, two expeditions led by experienced Everest guides Rob Hall and Scott Fisher summited the mountain, only to suffer the loss of eight members–including the two leaders–on the way back down. At the time, Breashears and his filmmaking crew were at the base camp preparing for their own climb–originally planned for that same day but postponed after realizing there would already be several other groups on the summit. Instead of making a film, Breashears and company participated in the rescue and only later reached the summit of Everest to successfully complete their film.

Broughton Coburn, a long-time resident of Nepal and a friend of David Breashears, was commissioned to write a book about the filmmaking expedition, the tragedy on Everest, and the mountain itself. He has more than succeeded with Everest: Mountain Without Mercy, a taut recounting of disaster and triumph at 29,000 feet. But this book is about more than just mountain climbing; Coburn has also included fascinating information about Nepal, Buddhism, and the Sherpa culture, as well as the history of climbing Everest. He covers everything from the causes of altitude sickness to Nepal’s increasing problems with deforestation, and through it all he weaves the story of that day in May when Everest again proved unpredictable–and deadly. For a white-knuckle climb to the top of the world’s highest mountain, complete with stunning photographs, you can’t do better than Everest: Mountain Without Mercy.

Be the first to review “Everest : Mountain Without Mercy” Cancel reply 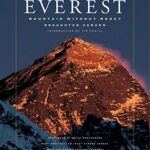