Seeking Mindanao’s Strangest Creatures
An expedition to capture live specimens for zoos in the United States, visits Mindanao in the Philippines and discovers its strange and exotic wildlife. The tarsier, a small nocturnal mammal, is only one of the odd creatures encountered.
Easter Egg Chickens
Ward Brower Jr. , breeds a strain of chickens that lay multicolored eggs, and are a variation of the Araucana variety from Chile.
Exploring the Mid- Atlantic Ridge
The research vessel Atlantis explores the submarine mountain range known as the Mid- Atlantic Ridge on a mission to photograph the mountain range, map its topography, and determine its structure and age.
American Masters in the National Gallery
The National Gallery of Art, established in 1940, provides a showplace for 200 years of American art, including work of Rembrandt Peale, Gilbert Stuart, and John Singleton Copley.
The Smithsonian Institution
The centennial of the Smithsonian Institution in 1947 highlights the legacy left by benefactor James Smithson. Thomas R. Henry recounts the history of the institution and describes some of its recent acquisitions.
Ancient Cliff Dwellers of Mesa Verde
At least 400 cliff- dwelling American Indians inhabited the Cliff Palace in Mesa Verde, Colorado. Don Watson describes a society that was matrilineal, as their Pueblo Indian descendants are today.

Be the first to review “National Geographic September 1948” Cancel reply 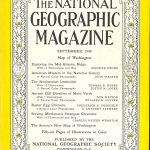