Unlocking Secrets of the Northern Lights
Knowing that the aurora borealis is a manifestation of charged particles and Earth’s magnetic field, does little to diminish the magic of the northern lights.
Exploring Ottawa
The capital of Canada is a modern city with traditional British roots.
Yemen- -Southern Arabia’s Mountain Wonderland
Harlan B. Clark visits the ancient land now known as of Yemen, reputed home of the Queen of Sheba, and reports on the way of life for most Yemenis.
Delhi, Capital of a New Dominion
The departure of the British and the partition of India, leaves Delhi the capital city of a nation containing one- sixth of the world’s population.

Be the first to review “National Geographic November 1947” Cancel reply 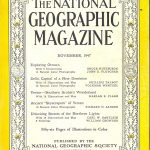