American Pathfinders in the Pacific
The success of the U. S. armed forces in the Pacific theater, followed in the steps of earlier American sailors who charted many of these islands during the 18th and 19th centuries.
Sa?o Tome?, the Chocolate Island
Sao Tome is a small Portuguese- owned island off the coast of West Africa. World War II did nothing to diminish the demand for the principal export of this island: cacao, the source of chocolate.
Camels of the Clouds
Llamas, alpacas, vicunas, and guanacos are the pack animals and companions of the people of the Andes.
Bonnie Scotland, Postwar Style
Glorious Scotland encompasses the wildy beautiful highlands of the north, industrial centers like Glasgow, and friendly high- spirited people.
Servicing Arctic Airbases
The schooner Effie E. Morrissey spent four summers under contract to the U. S. Army Transportation Corps, ferrying supplies to air bases in the Arctic. Even in summer, icebergs, polar bears, walruses, and tides make the journey hazardous.

Be the first to review “National Geographic May 1946” Cancel reply 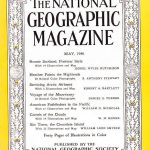