What I Saw Across the Rhine
J. Frank Dobie traveled for several months in the U. S. zone of occupied Germany after the war. He paints a picture of a country in defeat – – impoverished, sullen, and gray.
Canada’s Caribou Eskimos
The Padlermiut, or Caribou Eskimos ( Inuit) , are the only Eskimos tribe without a sea culture. Outside contact means that today they depend on traders as much as they depended on caribou.
Adventures in Lololand
Rumors of captured American servicemen enslaved by the Lolos of southwestern China, prompt Rennold L. Lowy to join a rescue party.
Sponge Fishermen of Tarpon Springs
Jennie E. Harris visits a community of Greek immigrants in Florida to learn about the underwater world of sponge divers.
Cuba- -American Sugar Bowl
Between the departure of the Spanish and the arrival of the communists, Cuba was a favorite destination for vacationing Americans. In addition to tourism, the Pearl of the Antilles was best known for the export of sugar and tobacco.

Be the first to review “National Geographic January 1947” Cancel reply 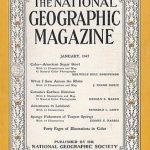