A Different Communism: Hungary’s New Way { Hungary’s New Way: A Different Communism}
Can a Soviet- bloc nation transform its economy through private enterprise while keeping the outward forms of Communism – – and succeed? John J. Putnam finds prospering Hungary on that tightrope. Photographs by Bill Weems.
Beirut- -Up From the Rubble
The capital of war- blasted Lebanon is determined to rebuild. What it needs is international goodwill, billions of dollars, time, and, most of all, peace. By William S. Ellis, with photographs by Steve McCurry.
Peoples of the Arctic { Hunters of the Lost Spirit}
On the crown of Europe, some 40, 000 Saami, or Lapps, doggedly resist assimilation into Norwegian, Swedish, or Finnish society.
Peoples of the Arctic { Where Magic Ruled: Art of the Bering Sea}
Eskimos of the Bering Sea captured in wood, bone, and sinew the inua, or spirit, of men and animals. William W. Fitzhugh, Susan A. Kaplan, and Sisse Brimberg show this high artistry.
Peoples of the Arctic { People of the Long Spring}
Drawn home again, Chukchi writer Yuri Rytkheu concludes that, for those who grew up there, the tundra of the Soviet Union’s far north is the only place to be. With photographs by Dean Conger.
Peoples of the Arctic { Introduction}
Associate Editor Joseph Judge introduces a special survey of life in the far north, where an emerging spirit stirs issues of cultural survival, land ownership, and resource use. With a double map supplement on the Arctic and its historical inhabitants.

Be the first to review “National Geographic February 1983” Cancel reply 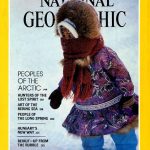