Billions of Barrels of Oil Locked Up in Rocks
Due to the war, demand for petroleum is ever increasing, while the author notes that it is doubtful that any new oil regions comparable with those in Texas and California will be discovered. A possible answer to coming shortages may reside in the oil- la
The Valley of Ten Thousand Smokes: An Account of the Discovery and Exploration of the Most Wonderful Volcanic Region in the World
The director of three National Geographic Society expeditions to the region surrounding Alaska’s Mount Katmai – – one of the world’s greatest active volcanoes – – gives an account of the discovery and exploration of the most wonderful volcanic region i
Helping to Solve Our Allies’ Food Problem: America Calls for a Million Young Soldiers of the Commissary to Volunteer for Service in 1918
Faced with the necessity for producing millions of pounds of additional foodstuffs to feed the armies on the battlefront and in the training camp, Americans organize numerous volunteer groups.
Shopping Abroad for Our Army in France
By provisioning America’s troops with supplies bought in Europe, the risks and delays of comparable shiploads of things sent across the Atlantic have been sidestepped, says the author, who describes the great achievements abroad of the U. S. government;

Be the first to review “National Geographic February 1918” Cancel reply 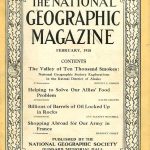