The Geography of the Jordan
Civilization along the Jordan River began about 10, 000 B. C. The Jordan River Valley is the site of many biblical stories and continues to be populated today.
New Road to Asia
The new Alaska- Siberia route is an air pathway that links America to Asia, introducing Americans to the people of Russia, including the Yakuts of Siberia.
Red Cross Girl Overseas
A woman in a group of 60 American Red Cross workers travels to Egypt to boost soldiers’ morale; she also glimpses the pyramids, rides an Arabian horse, flies a plane over the Nile Valley, lives in rugged tents, and survives an air raid.
The Society’s New Map of Soviet Russia
The National Geographic Society introduces and describes the first and only available modern map of the Soviet Union with place- names in English.
Michigan Fights
Michigan’s busy factories produce one- eighth of the weapons used in World War II, as well as engines, radios, ammunition, tanks, trucks, and planes.

Be the first to review “National Geographic December 1944” Cancel reply 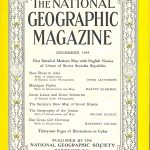