Spin Your Globe to Long Island: Only Six States Have More People than the Insular Empire that Ranges from a World’s Fair Through Potato Patches, Princely Estates, and Historic Shrines
With a population of 4. 5 million, New York’s Long Island is dotted with mansions, lighthouses, gardens, and beaches.
Country Life in Norway: The Beneficent Gulf Stream Enables One- third of the People in a Far- north, Mountainous Land to Prosper on Farms
Norway’s prosperity as a farming and fishing nation relies on the warming influence of the Gulf Stream.
Henry Hudson, Magnificent Failure: Just 330 Years Ago He and His Mutinous Crew Found Manhattan Covered With Goodly Oakes and Fought Indians in New York Harbor
A tragic hero, explorer Henry Hudson led four expeditions to the New World including his famous one to New York in 1609, which led to the settlement of New York City.
The Geography of a Hurricane: A Doughnut- shaped Storm Turned Back Time in New England to Candlelight Days, but Revealed Anew Yankee Courage and Ingenuity
On September 21, 1938, a devastating hurricane ripped through the Northeast from New Jersey to Canada, rearranging towns and beaches, silencing phones, toppling trees, and downing power lines.

Be the first to review “National Geographic April 1939” Cancel reply 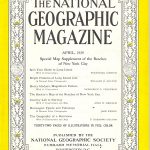