For decades, beloved astrophysicist Neil deGrasse Tyson has interpreted science with a combination of brainpower and charm that resonates with fans everywhere. In 2009, he founded StarTalk, the wildly popular podcast that became an Emmy-nominated talk show on the National Geographic Channel in 2015. Tyson’s pioneering book takes the greatest hits from the airwaves to the page in one smart, richly illustrated compendium for young adult readers. Featuring vivid photography, thought-provoking sidebars, enlightening facts, and fun quotes from science and entertainment luminaries like Bill Nye and Josh Groban, StarTalk reimagines science’s most challenging topics–from how the brain works to the physics of comic book superheroes–in a relatable, humorous way that will attract curious young readers. 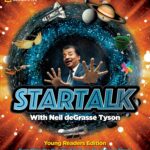