Identity. Experience. Emotion. The human face expresses all this and much more. As a result of one impulsive act, a teenager lost her face. Incredible medical advances and skilled surgeons made it possible for her to get a new one.

Passage to Another Time

Walking among the peaks of Central Asia.

The heads of these rare birds have become a target for traffickers.

Expanding on their immigrant parents’ successes, second-generation South Asian Americans are increasingly visible. And some are leaving their forebears’ career paths to take on new roles: politician, astronaut, stand-up comedian.

Each year in the Nevada desert, hobbyists gather to launch high-powered projectiles thousands of feet into the sky.

Antibiotic resistance is on the rise, thanks to an evolutionary trick.

Birds are disappearing from French farmlands

The bacteria and fungi that live in cheese rinds are tiny – but may lead to solutions for some big world problems.

This Look Could Have Killed

In a cave teeming with bats and snakes, a photographer thought he knew dangers.

Be the first to review “National Geographic September 2018” Cancel reply 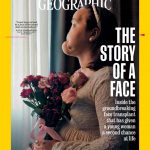