Bats of the Carlsbad Cavern
Chronicling the residents of Carlsbad Cavern, a bat biologist finds the Mexican free- tailed bat the most prolific, though several species coexist within the caves.
New Discoveries in Carlsbad Cavern: Vast Subterranean Chambers with Spectacular Decorations Are Explored, Surveyed, and Photographed
More galleries of underground art are discovered in New Mexico’s Carlsbad Cavern.
Exploring in the Canyon of Death: Remains of a People Who Dwelt in Our Southwest at Least 4, 000 Years Ago Are Revealed
Not far from the excavations at Chaco Canyon, New Mexico, an archaeologist examines the artifacts of a much earlier civilization carved from the cliffs of Arizona.
Everyday Life in Pueblo Bonito: As Disclosed by the National Geographic Society’s Archeologic Explorations in the Chaco Canyon National Monument, New Mexico
Ongoing excavations in New Mexico reveal minutiae of life in this pre- Columbian community, from clothing and jewelry to terraced gardens and burial sites.
Scientific Aspects of the MacMillan Arctic Expedition
Pending a full report from Donald B. MacMillan’s Arctic exploration team, the Society provides a personnel roster and details the procedures for collecting specimens in the field.
Experiences of a Lone Geographer: An American Agricultural Explorer Makes His Way Through Brigand- infested Central China en Route to the Amne Machin Range, Tibet
In an informal letter from China, the indefatigable Joseph F. Rock relates a dangerous leg of his journey to Tibet to collect plant samples from that region.

Be the first to review “National Geographic September 1925” Cancel reply 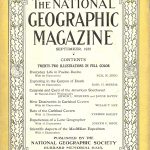