The last mass extinction was caused by an asteroid. The blame for the next one lies much closer to home – with us. Soon all that’s left of some of the planet’s most vulnerable species may be the photographs of animals collected in Joel Sartore’s Photo Ark.

Sea turtles are resilient, but threats are rising.

Relocating animals could save species – but poses risks.

Homans have damaged aquatic life. This creepy collection shows it.

The Dinosaur in the Room

Fossils for the rich.

Many species that live in freshwater are endangered. A photographer is racing to document them before it’s too late.

Cat vs. Bird: The Battle Lines

To save birds, should we kill of cats? A cat and bird-lover seeks a better solution.

First Photo in the Wild of Largest Bee

Hundreds of the planet species that anchor Earth’s ecosystems have disappeared.

Lines to lobster and crab traps harm right whales, but there are safer alternatives.

Be the first to review “National Geographic October 2019” Cancel reply 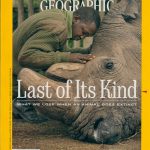