Impulsive, moody, maddening – that’s a typical teen. Yet viewed through the eyes of evolution, adolescent behavior makes sense. Like, totally!

Aussies love dropping into these drenched, narrow passages. Getting stuck is part of the fun.

A Whale of a Shark

Generally a gentle giant, the biggest fish is a beggar and a thief off the shores of Indonesia.

Nomads were never meant to live in big-city boxes. But there they are, in Mongolia’s capital.

A Homage to Ansel Adams

In the Sierra Nevada an unconfident young photographer became a lens master.

Be the first to review “National Geographic October 2011” Cancel reply 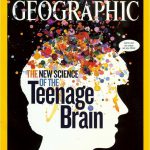