Adventures With South Africa’s Black Eagles
Studying a family of African black eagles in the Drakensberg Range for five months, the author often came under attack.
In the Wake of Darwin’s [ Beagle]
Along the route of the English naturalist’s round- the- globe 1831 to 1836 sail, the author sees the animals that prompted Darwin to develop his theory of evolution.
Look What’s Happened to Honolulu!
New construction and businesses have set off a boom that is changing the face of Hawaii’s capital, a former military outpost.
Satellites Gave Warning of Midwest Floods
Weather satellites and ground observations showed unusually heavy snow cover last winter in the upper Midwest, giving some hint of the devastating floods that followed.
Southern California’s Trial by Mud and Water
The heaviest rains in southern California recorded- history, last winter triggered mudslides and general havoc, taking more than a hundred lives.

Be the first to review “National Geographic October 1969” Cancel reply 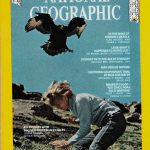