Portugal at the Crossroads
Visiting the nation’s landmarks, a staff writer and photographer describe the rise and decline of the seafaring power and report on Portugal’s economy, culture, and its struggles to retain African possessions.
Mustang, Remote Realm in Nepal
For ten weeks the Tibetan- speaking author caravanned through the tiny Himalayan kingdom. Though part of Nepal, Mustang practices the customs and the Buddhist religion of Tibet, its neighbor to the north.
Profiles of the Presidents: The Fourth of Five Articles { America Enters the Modern Era}
A professor of history at Harvard University continues his series on the U. S. presidency. Here he tells the story of America’s development from the era of Theodore Roosevelt through the time of Herbert Hoover, 1901 to 1933.
Bizarre World of the Fungi
A senior staff writer samples a vast group of mushrooms, molds, rusts, and yeasts, and photographs microscopic spores, fairy rings, and commercial mushroom farms.

Be the first to review “National Geographic October 1965” Cancel reply 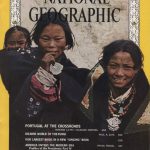