Milestones in My Arctic Journeys
Willie Knutsen recounts some of the highlights and adventures of his 12 years in the Arctic, including stays in Norway, Canada, and Greenland.
Nomads of the Far North
Sixteen paintings depict life of native peoples of Greenland, Canada, and Alaska at the turn of the century.
Freedom Train Tours America
On September 17, 1947, a special streamliner train called the Spirit of 1776 begins a countrywide tour of the United States. On board are priceless documents marking milestones in the history of the U. S.
Busy Fairbanks Sets Alaska’s Pace
Fairbanks, once a gold rush boomtown, is located only 120 miles south of the Arctic Circle. In spite of the cold and darkness that engulf it most of the year, life here is as lively and sophisticated as that of any city in the lower 48.
Quebec’s Forests, Farms, and Frontiers
Montreal and Quebec City are the two largest cities in Canada’s Quebec Province. In between, lies a patchwork of farms and forests.

Be the first to review “National Geographic October 1949” Cancel reply 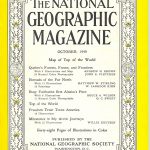