In the Diamond Mountains of Korea { In the Diamond Mountains: Adventures Among the Buddhist Monasteries of Eastern Korea}
After Confucianism crushed the many monasteries in the scenic mountains northeast of Seoul, the cloisters became havens of ne’ er- do- wells, wastrels, refugees from justice, profligates, and pleasure- seekers of every description.
Crossing Asia Minor, the Country of the New Turkish Republic
Carrying water bottles and tinted goggles and accompanied throughout by coffee and tobacco, the author traverses a country of bring- your- own- bedding inns and restaurants that are among the worst in the world.
Latvia, Home of the Letts: One of the Baltic Republics Which Is Successfully Working Its Way to Stability
After 700 years of subjugation and incomparable suffering during the last war, this new republic between Estonia and Lithuania disdains everything Russian and German and boasts a high level of sophistication.
Goldfish and Their Cultivation in America
Asian immigrants introduced to this country just 50 years ago, these members of the carp family are the most profoundly modified of any known race of domesticated animal organisms. While most ornamental varieties were developed in China and Japan, the; r

Be the first to review “National Geographic October 1924” Cancel reply 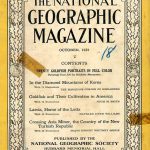