St. Louis: New Spirit Soars in Mid- America’s Proud Old City
Missouri’s major metropolis, a fabled 200- year- old port on the Mississippi River, tears out its crumbling center to build anew and construct the Gateway Arch, a memorial to the westward expansion
I Joined a Sahara Salt Caravan
A Belgian photojournalist travels with blue- clad Tuareg cameleers of Niger as they transport salt from pits at Bilma to buyers in Agadez.
Scientists Ride Ice Islands on Arctic Odysseys
Manned by rotating teams of scientists, research stations on floating ice monitor the great northern ocean. They probe the icy environment, from sea- floor mud to auroras and magnetic storms.
Our Life- giving Star, the Sun { The Sun}
The director of the solar rocket- astronomy program at the U. S. Naval Research Laboratory details current knowledge about the activities of our star.
Gateway to Westward Expansion { So Long, St. Louis, We’ re Heading West}
Historical paintings and first- person accounts summarize the 19th- century expansion of the United States from the supply depot of St. Louis.
Saving the Nene, World’s Rarest Goose
The Hawaiian bird, once hunted for food, is being raised in captivity in England for reintroduction to its homeland.

Be the first to review “National Geographic November 1965” Cancel reply 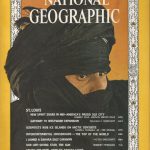