Life Among the Lamas of Choni: Describing the Mystery Plays and Butter Festival in the Monastery of an Almost Unknown Tibetan Principality in Kansu Province, China
A guest in the lamasery thanks to the local prince, Joseph Rock gains entrance into all religious ceremonies, where he is treated with honor and permitted to photograph the events.
The World’s Greatest Overland Explorer: How Marco Polo Penetrated Farthest Asia, Discovered Many Lands Unknown to Europe, and Added Numerous Minerals, Animals, Birds, and Plants to Man’s Knowledge
Though few believed his Asian tales during his lifetime, Marco Polo’s keen powers of observation and memory were validated when later explorers followed in his footsteps.
Fame’s Eternal Camping Ground: Beautiful Arlington, Burial Place of America’s Illustrious Dead
Arlington National Cemetery, land that once belonged to the family of Martha Washington, honors American heroes from generals to privates.

Be the first to review “National Geographic November 1928” Cancel reply 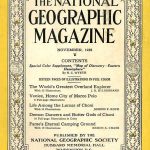