The restless brilliance behind his artistry continues to mesmerize us.

At Fakarava Atoll in French Polynesia each June brings a rare spectacle as groupers breed and sharks feed.

The Dinosaurs That Didn’t Die

Being Muslim in America

An estimated 3.45 million Muslims live in the United States today. Among them are immigrants from some 75 different countries. Despite a climate often hostile to their presence, they’re forming communities, building mosques – and thriving.

When war broke out in South Sudan again, hundreds of thousands of women fled with only what they could pack in treasured bedsheets.

Rid the Sciences of Sexual Harassers

They’ve lost their jobs in many fields – what about the sciences?

Astrophysicist Juna Kollmeier wants to understand the substance of the universe

An office building in tropical Zimbabwe keeps cool without air-conditioning.

Be the first to review “National Geographic May 2018” Cancel reply 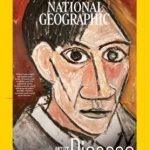