Telephone a Star: the Story of Communications Satellites { Telephone a Star: Communications Satellites Will Relay Messages Across Earth’s Oceans and Continents}
Built to withstand the hazards of space, these technological titans relieve overburdened phone lines by relaying communications worldwide.
Cities of Stone in Utah’s Canyonland
Remarkably, only a few tourists have seen the towering rock formations dotting southeastern Utah, but plans to establish a national park may soon result in more visitors.
Nuclear Power for the Polar Regions
Camp Century, a community of nearly a hundred men built under Greenland’s ice, enjoys plentiful power and heat thanks to a small nuclear reactor. A similar city has been built in Antarctica.
Oldest Known Shipwreck Yields Bronze Age Cargo
A dedicated crew salvages more than a ton of bronze and copper objects, and creates thousands of drawings and photographs for future study.
Netherlands New Guinea: Bone of Contention in the South Pacific
While neighboring Indonesia and the Netherlands vie for control of the western portion of New Guinea, some native Papuans prefer to continue living as they have since the Stone Age.
Australian New Guinea: Civilization Challenges the Stone Age
Australians work to improve the welfare of the island’s eastern half.
Death of an Island, Tristan da Cunha
The fiery birth of a volcano forces more than 200 residents to flee their home for good.

Be the first to review “National Geographic May 1962” Cancel reply 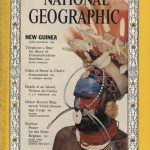