Centuries of eruptions have created hidden networks of caves under Hawaii’s volcanoes. Below, lava flows out of one of the underground passageways into the sea.

In the age of social media, separating truth from lies may be harder than ever.

Life in The Balance

The Perils of Pale

In Tanzania people with albinism are attacked for their body parts.

A Canadian mine yields one of the world’s best preserved dinosaurs.

A State of Grief

Death rituals have become a cathartic part of daily life in the Philippines.

Be the first to review “National Geographic June 2017” Cancel reply 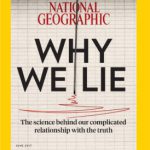