Life Afloat in China: Tens of Thousands of Chinese in Congested Ports Spend Their Entire Existence on Boats
Extreme poverty and overpopulation force those unable to afford land onto the water, where their houseboats mingle with commercial vessels in Chinese harbors.
Ho for the Soochow Ho
Floating on Soochow Creek and the Grand Canal from Shanghai to Hangchow, the author supplies glimpses of business and leisure life along Chinese waterways.
Hospitality of the Czechs
Czechoslovakian villagers serve up roast goose and good humor in a country of great promise in the heart of central Europe.
The Geography of China: The Influence of Physical Environment on the History and Character of the Chinese People
The president of Johns Hopkins University explains how China’s geography is ideally suited for its dominant industry, agriculture, but the agricultural character of the country fosters isolation and challenges political unity.
New China and the Printed Page
The written word, long venerated in China as the province of the elite, becomes a symbol of 20th- century progress as new printing presses cause an explosion of periodicals and a standardized national phonetic script combats widespread illiteracy.

Be the first to review “National Geographic June 1927” Cancel reply 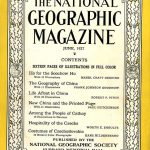