How Humans Got to the Moon …

Space prowess was built over time: the crews, the hardware, the goals.

Today’s space race is multinational, moneyed, and ever more crowded. What will its winners get?

Protecting the Sea at the End of the World

The West African nation is at risk from the chaos that surrounds it.

What remains in a glass of single malt Scotch whisky after the liquid is gone? A surreal collection of otherworldly landscapes – if you know how to look.

Let’s Send Only Women to Space

If females have the right stuff for long space voyages, why send men at all?

To take plastic drinking straws out of the waste stream, consider metal, silicone – even bamboo.

Studying one spot in the Dead Sea involved flying a drone and taking a briny swim.

Inventive prototypes of toilets might lead to low-cost, sanitary facilities that can work around the world.

Be the first to review “National Geographic July 2019” Cancel reply 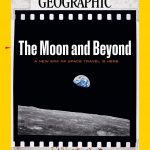