World’s Tallest Tree Discovered
The world’s tallest tree, more than 365 feet in height, is discovered in a northern California redwood grove.
Finding the Mt. Everest of All Living Things
A Humboldt County redwood grove holds the world’s three tallest trees and serves as a natural cathedral framed by the giants.
Night of Terror: Alaska Earthquake { An Alaskan Family’s Night of Terror}
An enormous earthquake destroys the home of an Alaska family and forces them to flee for their lives. It’s aftermath finds them thankful for their good fortune and proud of their community.
What Causes Earthquakes { Our Restless Earth}
The most popular theory of earthquake origins pinpoints titanic shifts in the Earth’s crust along fracture lines called faults.
New York City Map Launches United States Atlas Map Series
Americans are a people on the move as never before, and the Society’s new U. S. Atlas Series will become the road map by which to plan upcoming adventures across the nation.
The World in New York City
The world’s diverse cultures co- exist and collide in New York City, America’s mightiest city. The city is America in microcosm, from the towering skyscrapers of Manhattan to the fruit and vegetable farms of Staten Island.

Be the first to review “National Geographic July 1964” Cancel reply 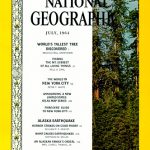