Standing Iceberg Guard in the North Atlantic: International Patrol Safeguards the Lives of Thousands of Travelers and Protects Transatlantic Liners from a Titanic Fate
In the wake of the Titanic’s sinking, an International Conference for the Safety of Life at Sea convened in London; now representatives of the principal maritime nations of the world keep prime northern shipping lanes under surveillance for icebergs.
The World’s Great Waterfalls: Visits to Mighty Niagara, Wonderful Victoria, and Picturesque Iguazu
Impressive in size and exquisite in surroundings, several waterfalls vie for the title of most spectacular, but the author concludes that each is exceptional in its own way.
Pirate Rivers and Their Prizes: The Warfare of Waterways Has Sometimes Changed the Geography of Our Continents
With the weapons of erosion, rivers continually wage war on the landscape, leaving canyons, waterfalls, and lakes behind in battles against man and nature.
Streets and Palaces of Colorful India
The brilliance of wealth and the darkness of poverty reflect a patchwork of races and religions in a country where the majority of the population can neither read or write.

Be the first to review “National Geographic July 1926” Cancel reply 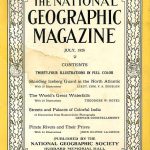