The Volcanoes of Ecuador, Guideposts in Crossing South America
A scientist’s mecca, Ecuador provides one such visitor with a volcanic eruption, a bevy of exotic wildlife, and a ride on a flood- swollen river.
Arizona Comes of Age
Once a way station of the West, Arizona enjoys a booming population and maturing economy.
Mapping the Home of the Great Brown Bear: Adventures of the National Geographic Society’s Pavlof Volcano Expedition to Alaska
Charting 2, 500 square miles of territory, a Society- sponsored expedition reshapes our view of the Alaskan Peninsula, and stalks a bear to boot.
Turkey Goes to School
The Turkish Republic discards Arabic script in favor of a Latin alphabet, requiring a nation to go back to school to learn its ABC’s.

Be the first to review “National Geographic January 1929” Cancel reply 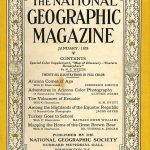