How We Mapped the Moon
Based on photographic coverage by the Lunar Orbiter spacecraft, a new Society wall map displays both faces of the moon in unexcelled detail.
Ancient Shipwreck Yields New Facts- -and a Strange Cargo
Diving on a Roman wreck off southern Italy, the author discovers rarely preserved wood planking and a cargo of marble coffins.
Atlanta, Pacesetter City of the South
With the cooperation of business and political leaders, the capital of Georgia embarks on an era of growth.
Kenya Says [ Harambee! ]
The Swahili word meaning Let’s all pull together characterizes the efforts of the East African nation to draw some 70 tribes into allegiance to a central government.
Awesome Views of the Forbidding Moonscape
Lunar Orbiters have photographed 99. 6 percent of the moon’s surface, providing the pictures in this portfolio.
That Orbèd Maiden. .. the Moon { That Orbèd Maiden, with White Fire Laden, Whom Mortals Call the Moon}
Subject of legend, poetry, and philosophy, Earth’s satellite now yields to scientific discovery.

Be the first to review “National Geographic February 1969” Cancel reply 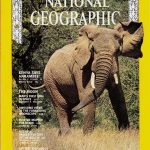