More of Sea Than of Land: The Bahamas
Dredging a deeper harbor and building hotels and casinos, the self- governing British colony off Florida invites a tourist invasion.
Alaska’s Mighty Rivers of Ice { Science Finds New Clues to Our Climate in Alaska’s Mighty Rivers of Ice}
Glaciers offer clues about our past and present climate; they seem to advance and retreat in relation to sunspot cycles, says the author, who predicts colder and wetter weather ahead.
Behind the Headlines in Viet Nam
With war swirling around him, a Geographic staffer gets acquainted with Vietnamese history, culture, and religion in the spiritual capital of Hue and the port city of Da Nang.
Japan’s Sky People, the Vanishing Ainu
A nun from Minnesota – – a noted ethnologist – – studies the customs of aboriginal inhabitants of Hokkaido, who are in danger of being absorbed by the Japanese.

Be the first to review “National Geographic February 1967” Cancel reply 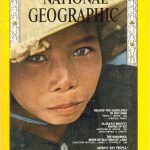