The Heart of Aymara? Land: A Visit to Tiahuanacu, Perhaps the Oldest City of the New World, Lost Beneath the Drifting Sand of Centuries in the Bolivian Highlands
The riddle of this pre- Inca city near Lake Titicaca is investigated by a former American consul. Colorful photos of the resident Aymara and Quechua people, and sights of the nearby Inca homeland in Peru, round out the story.
A Maryland Pilgrimage: Visits to Hallowed Shrines Recall the Major Role Played by This Prosperous State in the Development of Popular Government in America
Steeped in history since John Smith explored Chesapeake Bay, Maryland also witnessed the incorporation of the first American railroad and the nation’s first telegraph line.

Be the first to review “National Geographic February 1927” Cancel reply 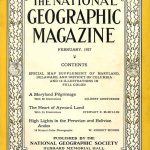