Daily Life in Calabria
A photographic tour of Italy’s earthquake- prone southernmost region shows an archaeological treasure- trove that also has one of the country’s most beautiful coastlines.
The Battle- Line of Languages in Western Europe: A Problem in Human Geography More Perplexing Than That of International Boundaries
Europe’s linguistic boundaries are more ingrained than ever after a hundred years of nationalism and far outnumber its political borders. The result is suspicion, discord, and discomfort – – threats to peace that could possibly be solved by an internati
Encircling Navajo Mountain with a Pack- Train: An Expedition to a Hitherto Untraversed Region of Our Southwest Discovers a New Route to Rainbow Natural Bridge
At the heart of the broad desert country along the Utah- Arizona border is the amazing Rainbow Natural Bridge. However, even with the help of blasting equipment, approaching it proves to be an endurance test.
The Great Wall of China { A Thousand Miles Along the Great Wall of China: The Mightiest Barrier Ever Built by Man Has Stood Guard Over the Land of Chin for Twenty Centuries}
Though not the first such rampart, the wall that China began building in the third century B. C. to defend against the Huns turned into a 2, 000- mile- long structure that surpasses the richest expectations of immensity and grandeur.

Be the first to review “National Geographic February 1923” Cancel reply 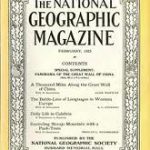