Sarawak: The Land of the White Rajahs
By showing solicitude for the welfare of its diverse peoples, British rule in Borneo has supplanted tyranny and oppression.
American Berries of Hill, Dale, and Wayside
This is the fourth in a series on American wild flora, with illustrations of 29 species of American berries and their blossoms.
The North Sea Mine Barrage
A combination of American ingenuity and British pluck made possible an extraordinary underwater minefield from Scotland to Norway, which contained the German submarine fleet in the North Sea and hastened the armistice.

Be the first to review “National Geographic February 1919” Cancel reply 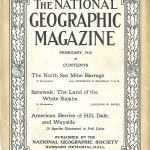