Kings of Controversy
Was the Kingdom of David and Solomon a glorious empire—or just a little cow town? It depends on which archaeologist you ask.
Veiled Rebellion
Afghan women suffer under the constraints of tribalism, poverty, and war. Now they are starting to fight for a just life
Swan Serenade
The whooper swan is a bird to inspire flights of fancy.
Star Struck
Astronomers turn their telescopes to the unbounded beauty of the Milky Way.
Alaska’s Choice
Salmon or Gold. If built, a huge mine would trans­form Alaska’s Bristol Bay region, possibly jeopar­dizing the world’s richest sockeye salmon fishery.
Twilight for Bats
Bats are crucial to ecosystems—devouring insects, dispersing seeds, and pollinating flowers. But in the U.S. an insidious new enemy is causing massive die-offs.

Be the first to review “National Geographic December 2010” Cancel reply 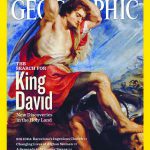