Bethlehem and the Christmas Story
A peaceful spirit pervades Bethlehem, where artisans carve and drill pearl shell into ornaments and beads and the ancient profession of shepherd persists in the surrounding countryside.
The Secret of the Southwest Solved by Talkative Tree Rings: Horizons of American History Are Carried Back to A. D. 700 and a Calendar for 1, 200 Years Established by National Geographic Society Expeditions
Using tree rings, which indicate wet and dry years, a scientist develops a calendar that dates back 1, 200 years and determines a chronology for Pueblo Bonito and other Southwestern ruins.
The Danube, Highway of Races: From the Black Forest to the Black Sea, Europe’s Most Important River Has Borne the Traffic of Centuries
Rolling past woods, castles, towns, and fields, the Danube River retains a prominent place in the cultures of the seven continents through which it flows.
Alpine Villagers of Austria
Donned for holidays, if not more often, traditional Austrian folk costumes include gold- embossed caps, embroidered belts, and colorful aprons.
Along the Way of the Magi
Images of the Well of the Magi, a cistern outside Bethlehem, and women in traditional dress with their babies remind us of the camel journey of three biblical travelers centuries ago.

Be the first to review “National Geographic December 1929” Cancel reply 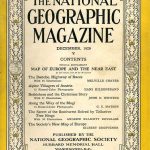