The Races of Europe: The Graphic Epitome of a Never- ceasing Human Drama. The Aspirations, Failures, Achievements, and Conflicts of the Polyglot People of the Most Densely Populated Continent
Because the complexities of the race problem in Europe are of more vital interest to the world than ever before, the entire December issue is devoted to the great polyglot of peoples who comprise the world’s most densely populated continent.

Be the first to review “National Geographic December 1918” Cancel reply 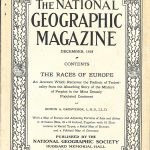