Among the Big Trees of California
They link us with the past, writes the Sequoia National Park superintendent of the leafy giants in his care, one of which may be as old as 4, 000 years.
Living Casks of Honey
A group of ants within each honey ant colony spend their lives hanging from the ceilings of underground chambers with bellies full of honey – – living food dispensers restocked by the colony’s workers.
Stalking Ants, Savage and Civilized: A Naturalist Braves Bites and Stings in Many Lands to Learn the Story of an Insect Whose Ways Often Parallel Those of Man
Microcosms of human society, certain species of ants lead armies, grind seeds into flour, and milk honeydew from plant lice treated as cows.
Redemption of the Pontine Marshes: By Draining the Malarial Wastes Around Rome, Italy Has Created a Promised Land
Under the leadership of Benito Mussolini, the Italian government transforms stagnant marshland near Rome into fertile farmland with homes for thousands of families.
Manless Alpine Climbing: The First Woman to Scale the Gre?pon, the Matterhorn, and Other Famous Peaks Without Masculine Support Relates Her Adventures
Shattering a glass ceiling, intrepid climber Miriam O’ Brien Underhill, along with several like- minded women, ascends several of the world’s most challenging peaks, proving that knowing how to use strength to the best advantage matters more than testos
When the Herring Fleet Comes to Great Yarmouth
From October to December, Yarmouth, England, explodes with activity as seasoned sailors and part- time herring handlers process an annual catch worth millions of dollars.
Compleat Angler Fishes for Fossils
Patience and determination mark the fossil hunters who chip away in the Rocky Mountains of Wyoming in search of finny creatures from the past.

Be the first to review “National Geographic August 1934” Cancel reply 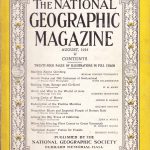