Exploring the Valley of the Amazon in a Hydroplane: Twelve Thousand Miles of Flying Over the World’s Greatest River and Greatest Forest to Chart the Unknown Parima River from the Sky
A hydroplane flies reconnaissance as the Alexander Hamilton Rice Scientific Expedition scouts Brazil’s upper Amazon River basin.
Recent Contributions by Members of the National Geographic Society { Recent Bequests by Members of the National Geographic Society}
Mr. George True Nealley and Miss Abbie M. White, both longtime Society members, are recognized for generous bequests of $ 20, 000 and $ 15, 000, respectively.
Where the Sard Holds Sway
On the island of Sardinia exquisite traditional costumes have yet to be usurped by modern fashions.
Marvels of Mycetozoa: Exploration of a Long Island Swamp Reveals Some of the Secrets of the Slime Molds, Dwelling on the Borderland Between the Plant and Animal Kingdoms
Observing slime molds in the wild, the author colors explanations of their appearance and reproductive processes with paintings of assorted species.
The Amazon, Father of Waters: The Earth’s Mightiest River Drains a Basin of More Than 2, 700, 000 Square Miles, from Which Came Originally the World’s Finest Rubber
Investigating the history of Brazil’s rubber industry, a U. S. Department of Commerce team recognizes the commodity’s role in South American exploration.

Be the first to review “National Geographic April 1926” Cancel reply 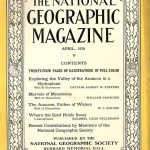