Mummies of the Pharaohs: Exploring the Valley of the Kings

IN THE MIDDLE OF EGYPT, near the ancient city of Thebes, is a mysterious valley. The sun beats down on it, a pyramid-shaped mountain guards it, and ancient kings are buried in it. It is the Valley of the Kings, the sacred burial ground of Egypt’s New Kingdom pharaohs, who ruled during Egypt’s last great period of power and glory 3,000 years ago.

UNCOVER TUTANKHAMUN, who died under mysterious circumstances when he was only 18 and whose treasure-filled tomb lay hidden for over 3,000 years.

MEET HATSHEPSUT, the only woman pharaoh in Egypt’s history. Her stepson was so angry with her for ruling Egypt when he should have been pharaoh that he moved his grandfather’s mummy to a new tomb just to get it away from hers.

ENCOUNTER RAMSES II, who was known for conquests in battle, his amazing building projects, his great age — and his 52 sons and uncounted daughters.

JOIN EGYPTOLOGISTS, tomb builders, and the ancient kings themselves in a journey to the barren, rocky valley known as the Valley of the Kings for a fascinating investigation of the Mummies of the Pharaohs.

Be the first to review “Mummies of the Pharaohs” Cancel reply 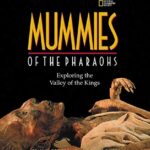